I never once thought I would be writing poems let alone finding myself in the process of writing poetry. I was, and still am, the sort of person who enjoys painting out every detail in the form of prose at great length. I had never felt satisfied to express what I wanted to say in a few words. I felt it mandatory to pour out every word that I felt for readers to soak in and later swim in as if they were in the sea within my head – within my soul.

This was until sister Janette Isahah Grant, a sister who also happened to become one of the editors of the poetry anthology The Muslimah Speaks: Her Voice, Her Spirit, pointed out when reading my prose that I may have a poetic touch and she therefore asked if I had written poetry or would consider giving it a try. I told her that I didn’t write poems, nor had I tried, and was not even sure if I ever could. However she encouraged me to give it a go, seeing that my pieces of prose had the underlying flow effect of poetic prose.

I remember how for months I was scared to even try – whenever I would begin to consider trying I would stop. 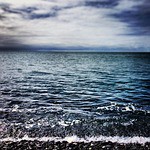 Every line helped me understand what I felt where the more I dug the more I would unravel and the more I unraveled the more I poured. It was as if I pricked a scab – the wounds of my heart and soul – so that there would be a flow of words streaming out to form meaning, understanding, and growth. Growth to heal with a scab left stronger – unable to hurt or prick again.

Once I began to write poetry I was unable to stop and I would at times write six poems per day as if the cage within my soul was unlocked with the ocean of words that poured. Most of my poetry would start off displaying the conflicts of my soul and the ending of the poem would provide solutions and the overcoming of conflicts. Conflicts that would include drowning within the seas of life but with the poem then showing how to swim, or, the poem would start off showing the soul not being able to trust or regain strength but as the poem would proceed my soul would show me how to trust and regain strength again. My poems would not only help me discover but also cope – cope with my life with physical disabilities – or with any struggles faced in life. Whenever I would have a burst I would decide to share what I wrote on Facebook in the hope it might help others too.

I was able to find answers and express what I wanted to say both in detail but in a few words in the form of a poem. However if I tried to write in prose my focus lay in the detail rather than the discovery. The more I wrote poems the more my prose tended to develop a poetic sense. There would be, at times, a burst of poetic prose and every other line of paragraphs would rhyme with the next with matters that would either be deep or random like the struggles of the soul or the joy of drinking scented tea. 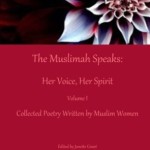 At once, when I had written my first poem, I rushed to tell Sister Janette how through Allah’s (subhana wa ta’ala) Mercy I was able to write poetry – a form of writing I thought I would never do and an unexpected path I never thought I would take. Sister Janette then selected four of my poems to be published in the poetry anthology The Muslimah Speaks: Her Voice, Her Spirit alongside other more established poetesses. I felt incredibly blessed, humbly honoured and truly grateful to have been encouraged and included by Sister Janette and also guided by both editors of the anthology: Sister Janette and Sister Elizabeth. If it were not for their encouragement and support I would not have had the courage to continue writing especially in the form of poetry.

This unexpected path in starting my journey as an aspiring poetess has led me into the process of publishing my first book inshaAllah. I often post some of my poems on Facebook for a taste of what to expect and also in the hope of encouraging souls to discover and grow as my soul does so too.

Readers may join my unexpected path in starting my journey as an aspiring poetess by following me and receiving updates on Facebook here: https://www.facebook.com/sn.hk.9

[And] taught him eloquence.

Sa’diyya Nesar lives a life with physical ‘disabilities’, where she strives to help others cultivate and focus on their abilities. She writes both prose and poetry for magazines hoping to uplift souls into living a better tomorrow. Her Tumblr is: sadiyyanesar.tumblr.com