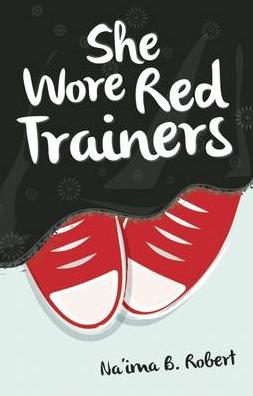 Prior to reading Naima B Robert’s latest young adult fiction She Wore Red Trainers I hadn’t really read much Islamic fiction. But the mere fact that it was a Muslim romance story – the preview of which I had earlier read – increased my thirst to savour the sweetness of its magical lines till the last full stop.

Reading it was like being in a different world. It was a complete page turner and, masha’Allah, from the time the curtain was raised to when it was drawn, I was filled with pleasure and inner joy for reading a story as beautiful as this authored by a Muslimah.

She Wore Red Trainers tells the story of two teenagers who fall in love, Ali and Ameerah; the both of them from two entirely different, far-from-perfect backgrounds. Ameerah, who had vowed never to get married as a result of her mother’s experience with the wrong choices of husbands, suddenly meets Ali. And Ali is battling with a lot of things such as his maintenance of recently recommenced religious practices, the reality of the loss of his mum, and the difficulties of adapting to a new environment he had just moved into with his family.

Neither protagonist can stop thinking about the other. Things become a little confusing for the young love birds as they both face their difficulties and obstacles in making the right decisions, in terms of Islam, family, and community. A lot of complications set in. Such as the over-protectiveness of Ameerah’s brother Zayd, who had also gone through a lot in shaping his sister to becoming the woman she was. And, for Ali, the high expectations from his father who wanted his son to pursue a degree in law.

The two love birds continue with their individual struggles enveloped by secret feelings of strong love for each other.

As my eyes travelled down the beautiful destination led by the powerful assembly of words into a breathtaking storyline, I became more curious to know how everything unfolds in the end.

Would there be any spine-freezing dates, awkward romantic conversations, enchanting eye contacts, and would they get to hold hands in the end, have their first kiss, first romance and what not? I kept imagining as I personally got butterflies all over me. It was full of suspense.

The central characters were strong and portrayed the beauty of Islam. The character Zayd portrayed both both good and not-so-good sides, playing both protagonist and antagonist in his own unique way.

I absolutely loved the fact that Ameerah’s mother – the weakest character – was able to grow enough nerves to get her irresponsible husband kicked out of their lives while standing up for her daughter. It had me smiling, giggling and of course, it had my heart in my throat.

I must confess that I totally enjoyed reading the book and I absolutely recommend it for all those who love to read. It is indeed a must read for every teenager and parent, especially considering the fact that, as Muslims, love can be very delicate as it is surrounded by so many boundaries which we are expected not to cross.

{And [yet], among the people are those who take other than Allah as equals [to Him]. They love them as they [should] love Allah . But those who believe are stronger in love for Allah . And if only they who have wronged would consider [that] when they see the punishment, [they will be certain] that all power belongs to Allah and that Allah is severe in punishment.}

Wardah Abbas is a twenty-something year old self-proclaimed eco–Muslimah based in Nigeria. She is a state attorney and a passionate writer who particularly loves to share lessons from her personal experiences. When Wardah is not writing, volunteering at an event or hanging out with friends, she can be found at the kitchen table whipping up edible ingredients into skin beauty regimens. She is the Earth Care staff writer for Young Muslimah Magazine. Catch up with her on therosespen.wordpress.com.