The first shift in my self-image came about 18 months back – a few months after the end of a 50 week period in which I attempted to lose 50lb. It was partly for charity, partly one of those ‘now I’ll set myself a challenge and sort myself out once and for all’ things…. As if I hadn’t been doing that over and over since I first grew in thighs, belly and backside.

Congratulations and compliments became standard as the weight disappeared, and I developed a new confidence in my body, a belief that perhaps I was somebody worthy of being seen. Tellingly, a fair few photos exist of me from around this time … 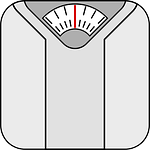 But once the 50 weeks were over, once I stepped off the cross-trainer, out of my dancing shoes, away from the green smoothies, the inevitable occurred. The weight began its comeback performance, and I lacked the energy to resist – I simply reverted to feeling like a failure once again.

In my desperate search to find a solution that would be longer lasting and less painful, I came across the work of Judith Matz and Elizabeth Frankel, and bought their book, The Diet Survivor’s Handbook. It was a revelation, and my first step to building a positive relationship with food and eating.

The shift continued with reading about intuitive eating, including Susie Orbach’s On Eating, and Linda Bacon’s Health at Every Size, as well as being supported by personal therapy and the counselling course I was taking at the time. [The premise of intuitive eating – i.e. trusting and listening to your body’s needs and desires rather than external regulation – is something that needs its own piece.]

The result of all of this was a massive shift around my feelings towards food and eating. It dissolved much of the shame that for me used to be associated with how I fed myself. In this time, I have gradually found myself closer and closer to a place where I eat without policing myself as much. Where I no longer feel out of control around food, or as though I cannot be trusted around it. Now my wariness comes more from worrying what those around me think when I eat in public – but that is perhaps linked to my ongoing issues with my appearance.

Rumi: ‘Your task is not to seek for love, but merely to seek and find all the barriers within yourself that you have built against it.’

I wish I had as positive an ending to relate with regards my feelings around my body, but that remains a difficult, sometimes impossible feeling – a challenging work in progress.

I’ve found some solace in groups such as I Shape Beauty and the Body Narratives, which have given me different answers to the question of body image and ‘acceptable’ appearance to the negative ones I grew up with. Blogs, poems and other art and articles by fat activists and body positive women have all played an essential part in providing me with a different ruler by which to measure myself. I think the most important part of these latter influences has been seeing bodies that look much closer to mine than any I ever see in mainstream media and marketing, whereas the former sources have presented me with insights into other women of colour experiencing many of the same insecurities as I always have. They have helped me feel a modicum of normality in a world that continues to insist I do not fit the ‘normal’ mould.

I’m still at a stage of transition, though, with constantly battling parts of myself – still struggling with feelings that my current shape is unacceptable versus (theoretically, at least) knowing that being fat is not wrong or bad or undesirable. I hear and accept the calls to be body positive, to love my body, to acknowledge the beauty of every body shape. But a lifetime of a very different story being told, of physical self-hate as standard, and of continuing to face society’s warped ideals of physical beauty, ‘normality’ and acceptability will not simply disperse due to these new discoveries. Not yet, anyway. So I keep on working on it – trying to find the way to a reflection of myself that I can dwell on more comfortably.

Abu Hurairah (radhiAllahu anhu – may Allah be pleased with him) narrated: Messenger of Allah (sallaAllahu alayhi wasallam) said, “Allah does not look at your figures, nor at your attire but He looks at your hearts [and deeds].”

This first part of this article is here: On Struggling to Love my Body: Part One

Wasi Daniju is a counsellor, photographer, and sometimes blogger. Her photos have appeared in numerous publications including The Occupied Times and Time Out.