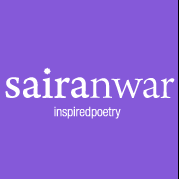 Elizabeth Lymer reviews her own experience of being a teenager to evaluate Saira Anwar’s first book, Death of a Beautiful Dream

I got into reading and writing poetry when I was a teenager but I didn’t really comprehend that I was surrounded by living, breathing, working poets. As is not uncommon for a teenager, I assumed that no one else could really understand my experiences, and that no one had experienced similar things to me. I wrongly assumed that valuable poetry was written by poets who were either dead (like Elizabeth Barratt Browning) or somehow institutionalised within their writing canon so as to make them unreachable.

I was a teenager in the days before the internet took off with all its social media tools that authors can use to connect with their readers.

Saira Anwar established her Inspired Poetry Facebook page when she self-published her first book in January. From there she posts snippets of poetry, warm words, and positive quotations several times a day. So, from her page, she endears potential readers with flavours of her book and gifts extras to her established readership who know and want to engage with her work and with her.

Reading The Death of a Beautiful Dream I tried to imagine receiving a copy of the book back when I was a teenager…. Did I know the common metaphors for women that are used repeatedly in the book? As a girl who was awkwardly growing into womanhood, did I need to be spoken to about my feminine beauty, and delicate strength and value, in the way that Saira speaks to her readers? Would I have been inspired by this book?

Well, as I have said, my perception of my experiences as common among my peers was a limited, almost non-existent, perception during my teenage years. My common knowledge was also limited, and my limits were exacerbated by my decided unwillingness to include myself in any beautiful generalisations that I discovered about females, let alone contemplate myself as being like a valuable jewel or a flower. Like many teenage girls I felt I was hurting and breaking and struggling to keep going. Teenage years are not easy and it is hard to bear them out. I think I would have benefited very much from Saira’s positive messages and pretty imagery about women.

I think I would have been inspired to use my pain to drive my writing, as she has done, and to dare to maybe rediscover beauty through this process. Saira speaks openly about having started to compile her book after experiencing a marriage breakdown. I imagine that, from my place of pain, I would have gratefully connected to her words grown out of her pain – and I hope that her repeated metaphors would have made their way through to me.

I do not for one second think that the teenage me, or early twenties me, would be alone in benefiting from Saira’s book.

Elizabeth Lymer is Editor of Young Muslimah Magazine and hopes to facilitate many new female writers to publish and reach out to others through their writing; she is author of Islamic Nursery Rhymes and co-Editor of The Muslimah Speaks: Her Voice Her Spirit.