I was contacted by the family’s assistant asking me to pitch ideas that would keep three girls active and entertained for five hours a day, five days per week. It sounds excessive, but it’s not really when you think about what our bodies were designed for, which is to run, swim, and jump from dusk till dawn. In addition, there’s a vast array of exercises to choose from (most of which don’t feel like a workout), so along with a good diet and plenty of snacks, I thought it was a very doable proposition. And, being a personal trainer, hopped to it. 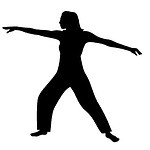 The girls’ father had become increasingly concerned about his girls’ weight gain and inactivity. Obesity among adolescents is a public health problem in Saudi Arabia, he told me, and particularly prevalent among girls.

Obesity is life restricting enough in its own right but it can lead to fatal illnesses such as diabetes, coronary problems and cancer too. I admired the father’s conviction to essentially fight this grim truth in such a dramatic and determined way.

I booked tennis courts, trampolining, zumba, wall climbing and pedalos as well as planned for exercising them in their home gym and in the park – equipping them with lifelong know how of how to stay fit and healthy no matter the financial or spacial constraints. That’s the wonderful thing about getting into training, making it a part of your life – it’s a life changing, life enhancing, everlasting education.

To be honest, I was expecting to make a few faux pas as I wasn’t very au fait with their Muslim faith at the time. But I shouldn’t have been worried. The girls were sisters, like any other sisters – bickering constantly, ‘borrowing’ each other’s designer gear, and talking about One Direction, pretty much incessantly. As a sister myself, I understood! We discovered we had a lot in common, in fact. We loved the new Shakira song, preferred Nike as a sports brand and loved to sleep!

The elder’s sister’s attitude to sweating under the scarf was, “Well, I’ve worked harder than you guys!”

The one challenge we faced was that the elder sister was a lot more observant than the other girls and chose to wear a hijab, so when we would attend a fitness class, her headscarf would ‘make her head bake’ and when we would go for a run, we would stop frequently to retie the scarf (everyone was secretly grateful of this!). But we all had a giggle about it and took turns to create sound designs that could probably withstand a bungee jump – her sister secured it so tightly I’m sure it actually made the poor girl more aerodynamic! The elder’s sister’s attitude to sweating under the scarf was, “Well, I’ve worked harder than you guys!” Lovely, lovely girls.

Since the girls have left I have opened my own personal training studio in the heart of the City of London. It’s a beautiful space – red, black and silver … Brand new with second to none equipment.

In honour of these sweet, intelligent, thoughtful girls, wholly committed to friends, family and their faith, The Anna Reich Personal Training Studio in the City of London (EC4R 2SU) will be introducing a body conditioning class purely for Muslim women who would like to keep fit in an environment that honours their Islamic faith and their personal traditions of modesty.

From 2-3pm on Mondays and Wednesdays, I will work on all aspects of fitness from cardiovascular to strength and flexibility. The classes will be for an intimate six, costing £30 per head. The studio will be closed to all other persons during these hours and once the workout is done, there are individual private shower and changing room facilities available.

There is enough time and space in the world to allow people to maintain their differences (which keeps the world interesting), well, there is at my Studio anyway.

It is narrated on the authority of Anas that the Prophet (may peace and blessings be upon him) observed: By Him in whose Hand is my life, no bondsman (truly) believes till he likes for his neighbour, or he (the Holy Prophet) said: for his brother, whatever he likes for himself.